After completing her studies of foreign languages in Erlangen (English, Italian) she had a short training to become a retail business woman, she was then immediately made a trainee, and subsequently became department head in a large German department store group. In 1998 Ms. Wunderlich relocated to London and took over the position of International Field Sales Executive for an English production and trading company for three years.

From 2002 to 2006 she took on in the same company the position of export sales manager and was able to achieve very good results in this task. Because of her outstanding achievements, she received the “Queen’s Award for Export Achievement” from Queen Elizabeth.

Due to her family situation Ms. Wunderlich moved to the United States in 2006. She work there as a ski instructor, and German language teacher at a school in Seattle, Washington and organized various events for the resident German community.

After returning to Germany in 2010, she worked as an assistant in a company for education and training in the field of quality control.

Since 2015 Kerstin Wunderlich has been a Managing Partner at ISG Personnel Management Ltd. and specializes in HR consulting for commercial enterprises

During her career Ms. Wunderlich collected intercultural competence and extensive international experience in various roles in both technical and managerial positions.

Motto: “What you can dream, you can achieve” 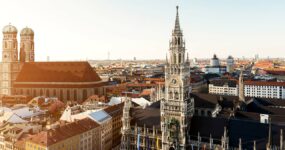